My First Quilt: Finding Myself, Finding a Partner 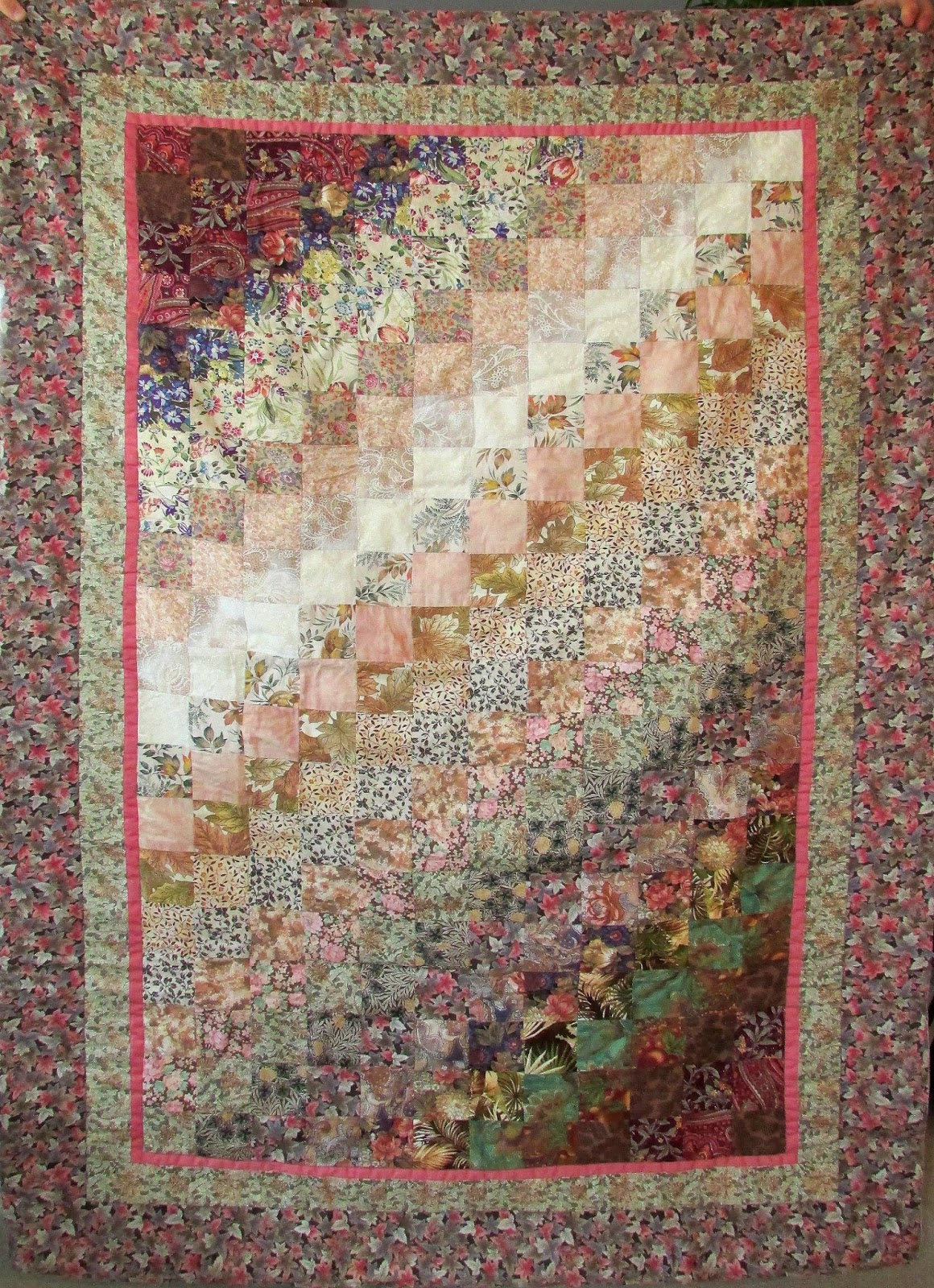 I will always know when I made my first quilt, because it was 1996, the same year I met my husband, Tom.  I was working for a Ben Franklin’s Craft Store, if you remember those!  There might still be one or two around, and this one was in Burlington, VT.  They had a bit of everything, and along with learning to frame pictures and work the customer service desk, I learned to cut fabric.  Watercolor quilts were big then, and being an artist at heart they caught my eye.  Even from the start, my quilt journey was about imagery, color and texture, and I was hooked long before I sewed my first seam.  I bought a book and an assortment of soft pinkish green florals, not knowing exactly what I’d do with them.  Deciding to start small, I made myself a square template out of cardboard and cut out a number of medium sized squares using right-handed scissors in my left hand.  I’ve never been able to break that habit.  Left-handed scissors were so awful when I was a kid that I never used them, although when I do a lot of cutting it still bruises my thumb.

Tom, who was an artist in his own right, offered input when I asked for it and was quietly supportive while I experimented.  I spent a day arranging the squares on the floor with two cats underfoot, only to finally discover that the arrangement I liked best was one I could have strip pieced if I’d known what strip piecing was.  The sewing was simple and done on an old used teal-colored Singer that exactly matched my mother’s and was probably 20+ years old.  I think I paid $25 for it.  The borders were as simple as possible.  Then I realized that I had no idea how to actually quilt this little lap-sized piece.  Being intimidated by even straight stitching, I finally tied it and stitched only the borders in the ditch to hold it together.  It doesn’t even have a real binding.  Instead I sewed the back on top and turned it right-side out.  Now, eighteen years later, it has held up and still has an occasional place on the couch under a cat. 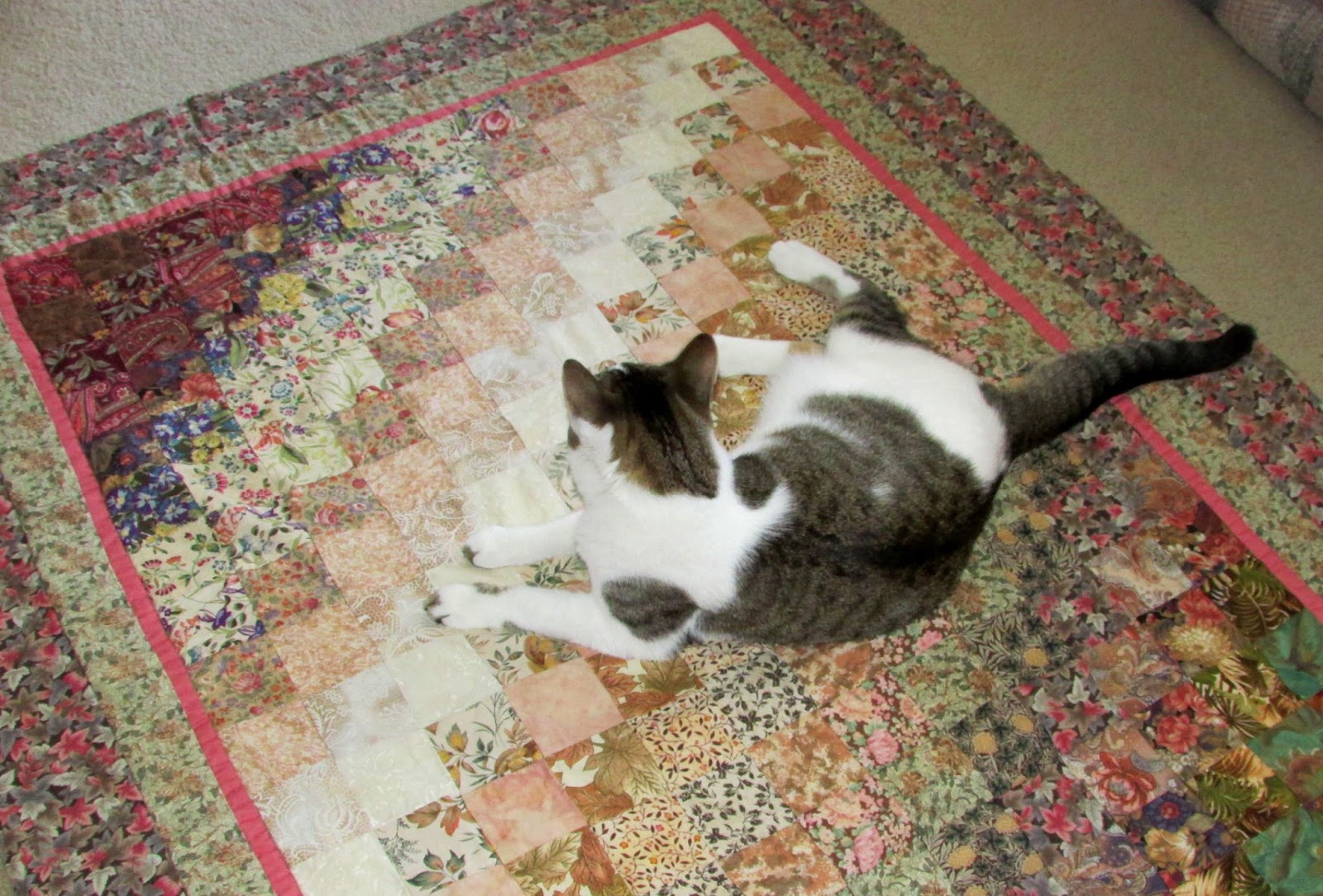 Although my grandmother quilted, I never learned anything about it from her ‘cause I’m not a Sunbonnet Sue kind of girl myself and hand applique never grabbed me, although I now know enough to have great respect for it.  So, I taught myself from books, consulting my new artistic "boyfriend" along the way.  As my interest grew, I tried several Quilt in a Day books and made a Trip Around the World bed quilt and several lap and baby quilts for friends and relatives.  They were all still stitched in the ditch.  Some of them were pretty Irish Chains and Attic Windows, but it was soon clear that I wanted to do more artistic things.  After a year, we’d moved from Vermont to Northern California, where there turned out to be the best quilt shop I’ve even encountered right there in town, the Quilted Angel in Petaluma.  Their shelves were eye candy, and wearable art was becoming popular.  I promptly stopped piecing squares and tried my hand at machine applique and vests.  (Rosemary Eichorn exhibited at the local quilt show around that time, so I didn't lack for inspiration.) Then I moved on to wall-hangings art quilts, and landscape collage, which is what I’ve been doing ever since. 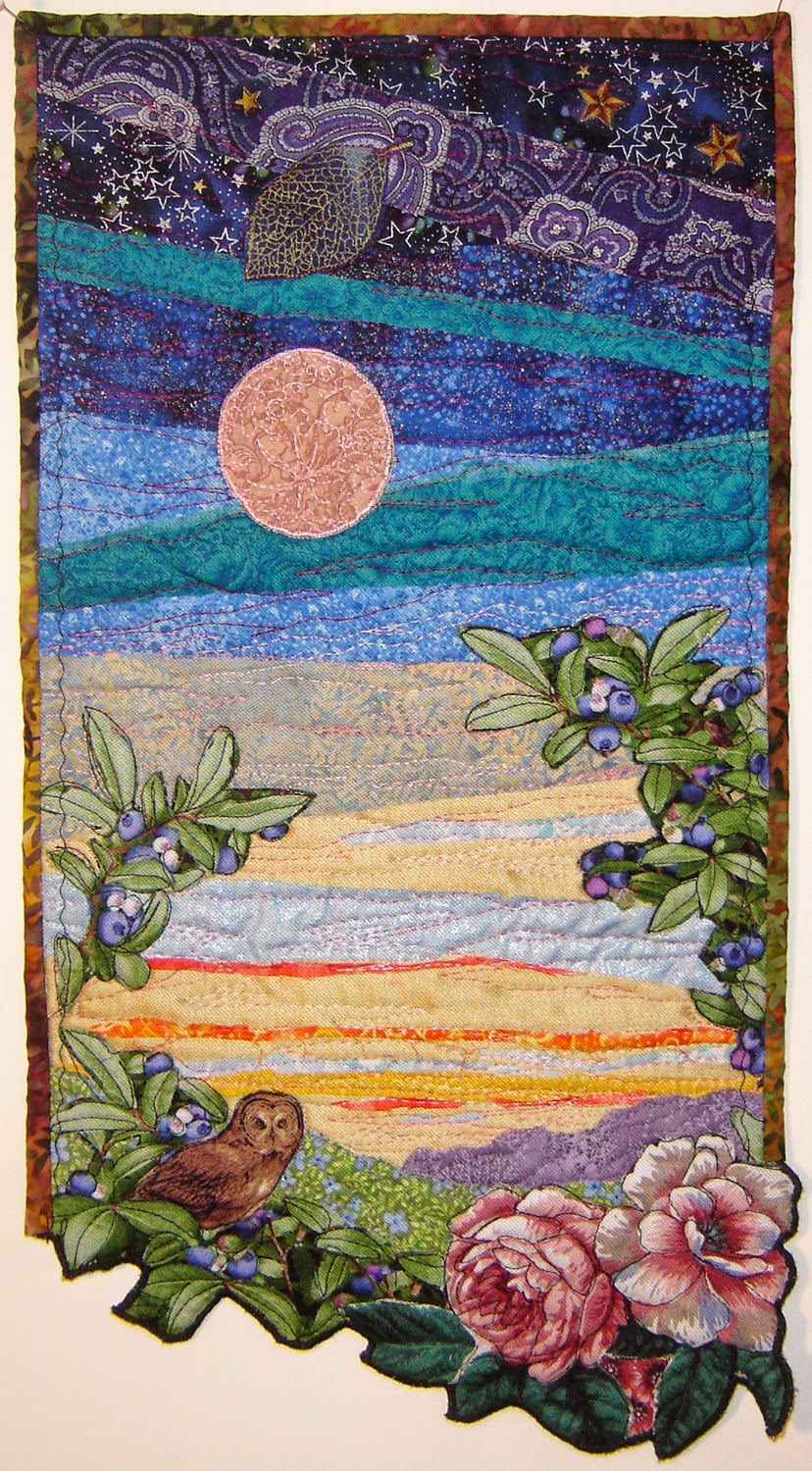 As my skills evolved, so did my relationship with Tom.  The quilts became collages based on my love of the wild places that we explored together.  When I discovered that Tom appreciated stillness and connection to wilderness, I knew I had found a lifelong partner.  My goal in quilting became to capture that moment of solitude when the viewer feels connected to the natural world.  A moment I could share with Tom.  My quilts began to mirror both my past and our shared adventures, from trips to Hawaii to starting a family.


I began to find my voice as a quilter and artist, while in Tom I found a partner who was genuinely interested in quilting as an art form and supported my every step.  If it was meaningful to me, he encouraged me to pursue it, and he only offered critiques when asked.  Since he’s got a good eye, his feedback was always useful.

After a few years, when we examined how much I was spending on my new hobby, it became clear that it needed to pay for itself.  I joined a fiber arts co-op, married Tom, and never looked back.  Today, we have become a collage of shared experience, supporting each others' creative work and choosing a life together that allows time for art, wilderness, and family.  I find that I have made a commitment not just to our relationship but to myself, to my art quilts and to my own creative spirit.

I have made 166 quilts to date, but it all started with one. More samples of my work can be seen in my etsy store and on my website. 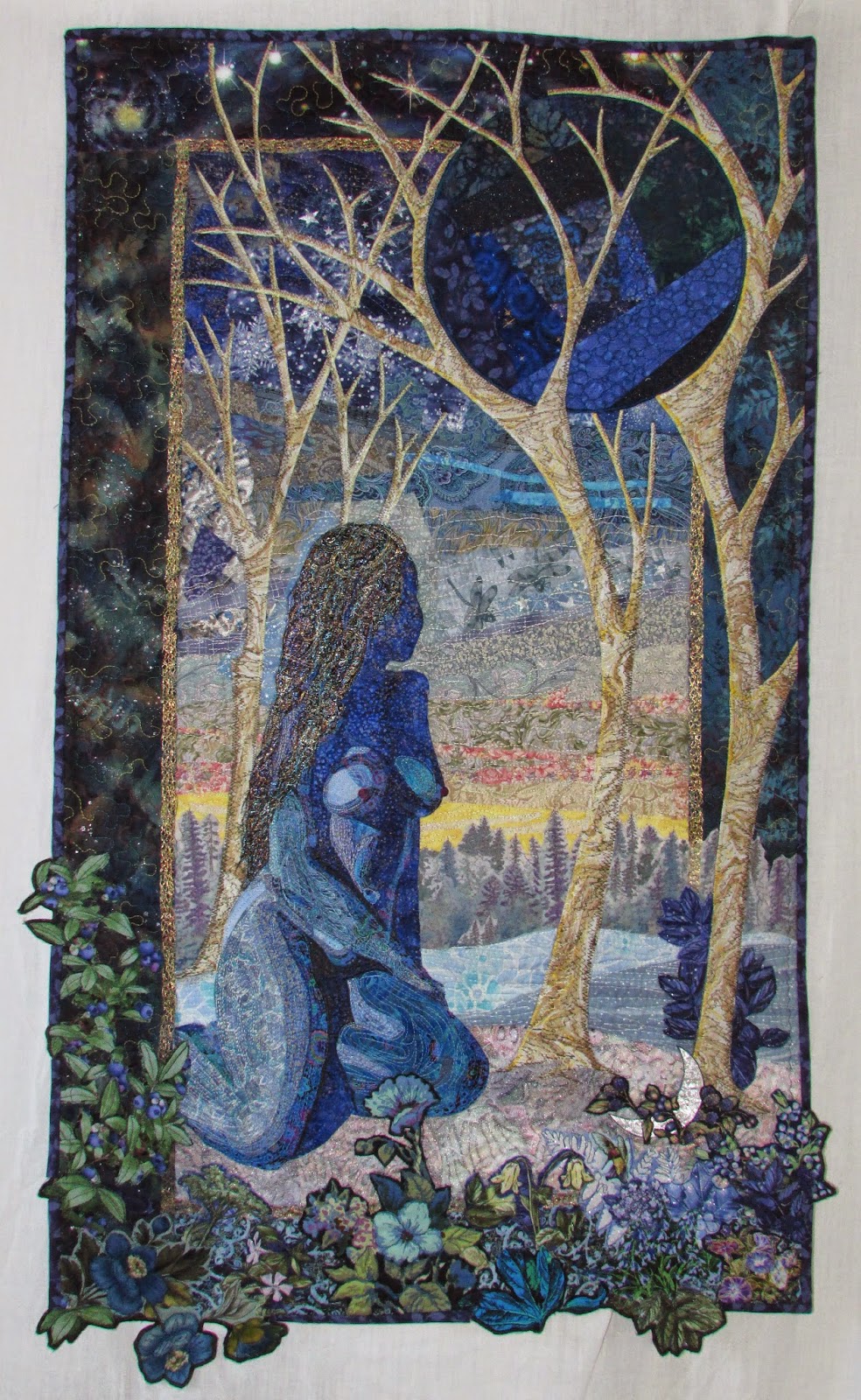 We're a long way from summer, but I've been itching to work on this piece!  It's not done yet; there is tulle to trim away and lots of top stitching to do on the flowers and leaves, but here it is in progress.  It's based on a photo from Child's Park here in Northampton from last summer, and the largest flower has some hand-coloring with Inktense pencils.    Now, if only the world around me would regain a bit more color too! 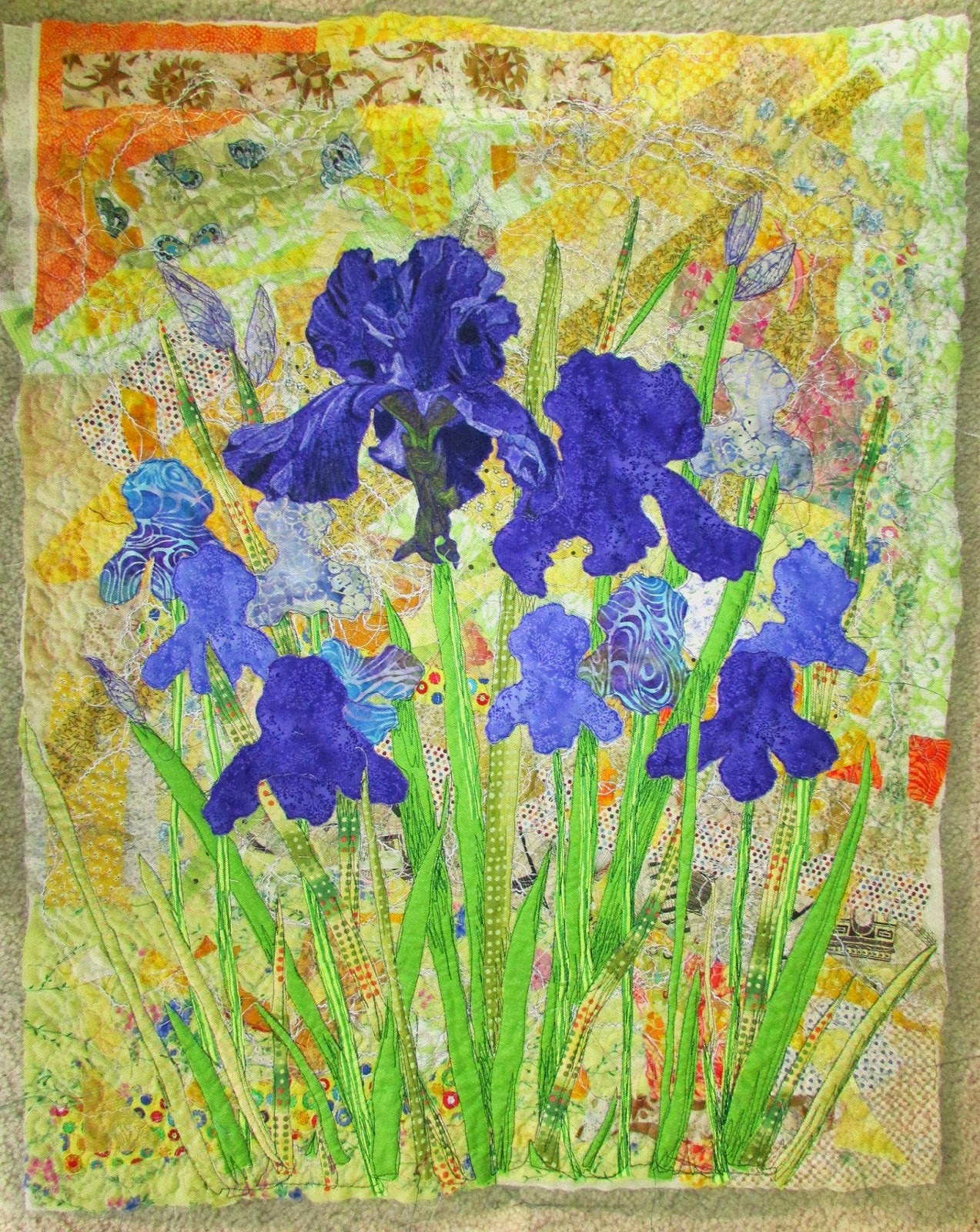 Posted by Elizabeth at 1:48 PM No comments:

Here's the early sketch for my next commission.  I can't wait to get started on it - back yard birds in autumn.  Woodpeckers, gold finches, etc.  I've got the perfect autumn fabrics! 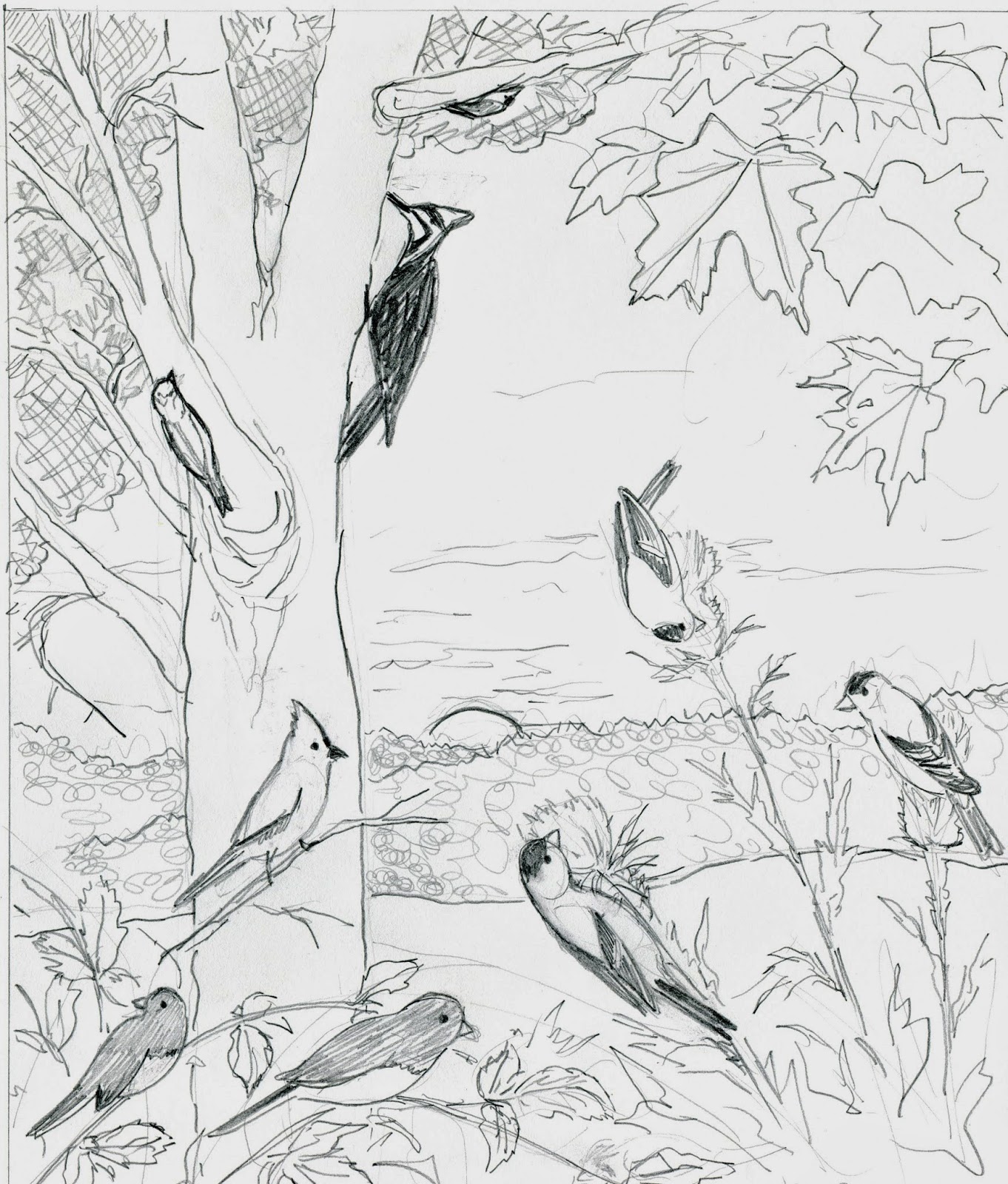 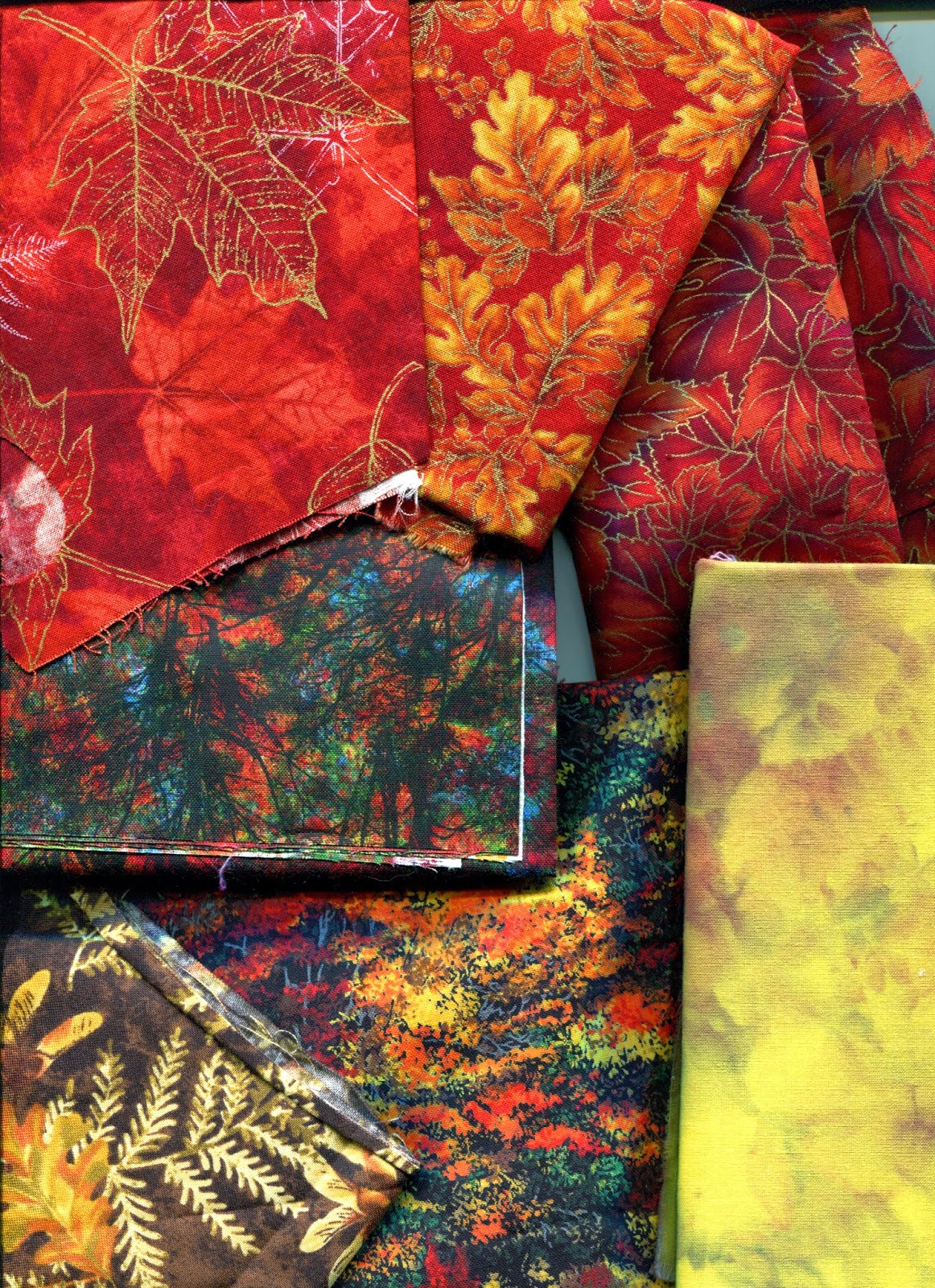 Posted by Elizabeth at 1:06 PM No comments: